Giada Arney Attempts to Answer, "Are We Alone?" 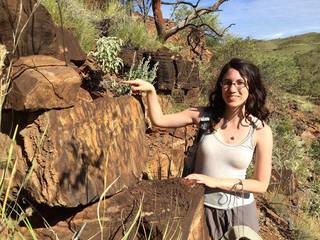 Arney in the Australian outback.
Credits: Courtesy of G. Arney

This should be an h1

Where are you from?

I'm from the suburbs of Denver, Colorado.

What got you into space?

My mom used to do stargazing with me and my sister in our backyard, when I was 4 or 5. I thought that was fun. I remember my mom would tell me and my sister about space stories she heard in the news, like the Voyagers visiting the outer planets, and that sparked my own interest. I also read every children's astronomy book in our local library. But at the time, I didn't necessarily think I wanted to do it as a career. It didn't click that you could do it as a career until later.

By the time I got to college, at some point I was like, 'This is cool, maybe I could do this for my job.' A lot of my friends were bouncing around between different majors but I knew I wanted to do astronomy.

I think it was a class I took my sophomore year of college, called E.T. Life, at the University of Colorado, that first introduced me to exoplanets. Some of my friends decided to form an astrobiology club, sparked by some of the things we learned in this class.

What did you do in astrobiology club?

It was mostly hanging out in the planetarium and eating pizza and talking about astrobiology. But we also did field trips to Yellowstone and a conference in Arizona.

What did you do after college?

I took a year off between undergrad and grad school, working at an after-school science program for kids at an elementary school. After that year, I went to grad school at the University of Washington.

For my Ph.D. dissertation, I worked with Vikki Meadows, the principal investigator of the NASA Astrobiology Institute's Virtual Planetary Laboratory. The first project I worked on was about Venus, one of the least habitable planets you could imagine. We observed Venus with the Apache Point Telescope in New Mexico. You can actually see below the cloud deck to the surface of Venus from Earth at certain wavelengths. Most people don't know this. I made maps of the abundances of different trace gases in the lower atmosphere of Venus for this project. Even though Venus is a hostile environment today, there's evidence it may once have had oceans of liquid water, so it's really interesting to think about what happened to Venus and why.

Then, I shifted to working more on using early Earth as an analog for exoplanets, which are planets outside our solar system. I started working on a project called the Pale Orange Dot. Geochemical evidence suggests that between 4 and 2.5 billion years ago, there may have been an intermittent haze in the atmosphere of Earth similar to the haze in the atmosphere of Saturn's moon Titan. It's a really alien phase of Earth's history -- our planet wouldn't have been a pale blue dot, it would have been a pale orange dot. 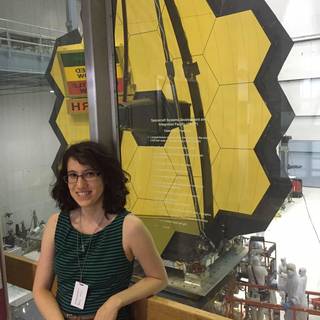 Arney with the primary mirror of the James Webb Space Telescope.
Credits: Courtesy of G. Arney

We thought about questions like: What would our planet look like if you were looking at it as an exoplanet? How you might infer biosignatures -- the signs of life - from looking at such an alien planet?

So, would we think that ancient Earth was habitable, if it were an exoplanet?

What did you do after graduate school?

I started off as a NASA postdoctoral fellow, still working on photochemical modeling of planets - in particular, figuring out how we would know if a given gas in a planet's atmosphere is a biosignature or not. In January 2017, I was hired as a civil servant at NASA's Goddard Space Flight Center.

Usually I spend my day at my computer doing simulations and working on documents for LUVOIR (Large UV/Optical/IR Surveyor), a mission concept for characterizing planets. It is one of four concepts being studied for the next Astrophysics Decadal Survey. We want to find out: Are there habitable planets around nearby stars? Are we alone in the universe? If there is life on a nearby planet, and if there are biosignatures, how do we detect them? We want this mission to be able to answer these questions.

Tell me about a favorite memory from your career.

When I was studying Venus, I was trying to figure out the quantities of gases in Venus's lower atmosphere. I collected thousands of what scientists call spectra - basically, graphs showing how different molecules in the atmosphere react to various wavelengths of light. My big challenge was to make a computer model that matched the observations, so I could make sense of them and figure out the abundances of molecules. When I finally produced a model that looked like the real thing, that felt really powerful.

I got into Carl Sagan's "Cosmos" when I was in high school. My grad school advisors were also super inspirational: Vikki Meadows and Shawn Domagal-Goldman.

What advice would you offer someone who wants a career like yours?

What I do is astrobiology. To do astrobiology, you need to become an expert in one discipline (for me, that's astronomy), but you need to know how to interact with people across a whole range of disciplines. I think a lot of scientists are not used to communicating with people in other fields, but it's a really fun and rewarding experience that makes the science so much richer. Stay curious and think about how your science connects to other areas of study. Planets are so complicated, especially when you throw life into the mix.

If you're a high schooler interested in astrobiology, the important thing is not to become overwhelmed by how much astrobiology encompasses. You don't have to become an expert in astronomy and biology and everything else. Specialize in one area, and make connections to people you can collaborate with who specialize in other things.

What do you for fun?

I love to travel. Most of my travel lately is work travel, but work has taken me to really cool places like the Australian outback and Tokyo. I always try to do fun things even when I travel for work. I love to try out new things. I recently took up crocheting. I do like to go to the Washington D.C. museums now that I live near them. I loved hiking when I lived in Colorado. I also love gardening.

My favorite space image is probably this one: https://saturn.jpl.nasa.gov/resources/7706/saturn-backdrop/

It's so beautiful, and I love that you can see Earth as a pale blue dot peeking between Saturn's rings. These are the kinds of images that remind me why I got into astronomy and planetary science in the first place.